This is an essay in which a student of Modern and Contemporary Art looks for signs of schizophrenia in Agnes’s personal world – her paintings, lectures, and thoughts. Alexandra has no direct contact with people with schizophrenia. Her observations of the disease are virtual – on the confessions of real people on YouTube, suffering from an unstable state of mind. In this extremely short composition, she comments on Agnes’s work through the eyes of a painter and future art critic and compares it to information about the disease from the videos, articles about Agnes Martin, and artworks by other artists who are also said to suffer from schizophrenia.

“Friendship”,
Agnes Martin, 1963
The silence on the floor of my house
Is all the questions and all the answers that have been known in the world
The sentimental furniture threatens the peace
The reflection of a sunset speaks loudly of days
A. Martin
I began writing this text with the naive intention of denouncing the diagnosis of schizophrenia of the minimalist artist Agnes Martin, a key figure in American abstract art during the second half of the twentieth century. Agnes was a person with rich and varied life experience, who embarked on her career late – in her mid‑30s, when she began her bachelor’s program at Teachers College, Columbia University. However, she quickly established herself as an artist of the new age. She herself defined her work as abstract expressionism, but her work can justifiably be perceived as minimalist and preceding the phenomenon of minimal art. She taught Art at the University of New Mexico and gave lectures at the University of Pennsylvania, where her professional guidance to students would go hand in hand with advice for personal growth.
In order to find out more about Agnes‘ mental state, along with her works of art, which I compared with those of other artists with the same illness, I looked at her collection of lectures, poems and thoughts “Agnes Martin: Writings” [1] – in my opinion, an in-depth study of the basic mental processes driving the perceptions of the individual (She does not pay attention to intimate behavior, which is the main object of study of Freudianism and Jungianism). In her silence, Agnes got to know her own essence, her revelations sounding like Buddhist parables. This was no coincidence, as at Columbia University she attended lectures by Daisetsu Teitaro Suzuki, a Japanese philosopher and psychologist who promoted Zen Buddhism. Joy, pride, fear, genius, humility, life, inspiration, dissatisfaction, possession, violence, reality were some of the categories that Agnes confidently discussed in her lectures.
Despite the interesting definitions and dependencies formulated by Agnes, probably strongly influenced by Buddhism, essential for this study is the question of whether this confidence in the knowledge of subjective reality is representative of a person suffering from schizophrenic disorder. A brief study of videos of patients with schizophrenia2 showed that, in general, victims of schizophrenic disorders are introverted individuals with experience in self-monitoring and, with appropriate treatment of the disease, many reach a high level of self-knowledge. According to Henry Martin, the author of “Agnes Martin: Pioneer, Painter, Icon”, it is not known when exactly Agnes Martin was diagnosed with schizophrenia, but there is evidence she got professional help in the early and late 60s, which led her to a sense of inner peace and artistic confidence right after [2]. Suffering from hallucinations and memory loss enhanced by the electroshock treatment she received, Agnes fought daily to keep her sanity. In her lectures, she sets the code for achieving true freedom – by raising awareness of the deep-seated processes, she enables the listener to consistently eliminate the patterns of power and obedience inherent in the relationships we build with the world around us. 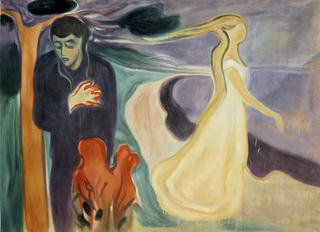 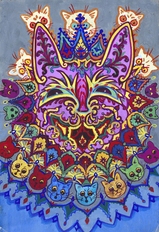 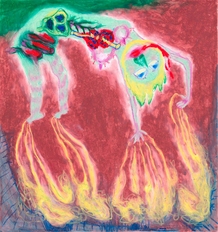 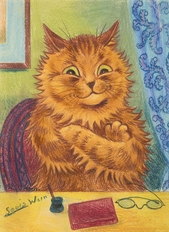 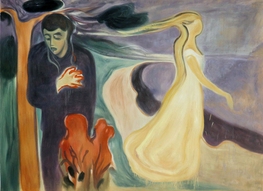 Fig.3. Louis Wain's cats
Fig.3. Louis Wain's cats
Before I started the essay, I knew that the creative activity of schizoid individuals is characterized by severe deformities and anxiety. Some artists with unlocked schizophrenia focus on figural compositions. Typically, the shapes in them are often distorted and the colours look sickly, although other works of the artist may show mastery of realistic drawing and tonality. An example of this are the paintings of Edvard Munch and Karen Blair (Figs. 1 and 2). In the works of others there are recurring intrusive motifs, with some authors realized in bright psychotic colours – the motifs in Louis Wain‘s cats (Fig. 3), sometimes replacing even the contour, the points of Yayoi Kusama (Fig. 4). Although many of Agnes‘ works represent grids, dots and other repetitive elements, with their pastel colour, even structure and ephemeral lines, they silence the flow of thought and serve as guidelines to a meditative state of mind. In their structure, process of creation and suggestion, they are very close to the Far Eastern mandalas. Although Agnes claims that the essence of the painting is not determined by the artwork, but by the attitude (“inspiration”) of the observer, she herself speaks of her artwork as seeking and inspiring calm. The self-control in her work puzzled me until I found other artists with schizophrenia that used restrained colours and/or shapes. An artist suffering from the disease, with delicate colouring and fine drawing, is Richard Dadd. During his stay in psychiatric institutions he created a series of about 30 watercolours – “Sketches to illustrate the Passions” (Fig. 5). The themes and performance of the drawings speak of highly developed observation, sensitivity and empathy, despite the unstable mental state of the artist. During World War II, Edmund Monsiel hid in an attic, where he created black and white compositions of countless faces (Fig. 6). His works are filled with fine lines and executed with unobtrusive contrast, and in many of them we find traces of medieval Christian art [4]. He did not receive treatment for the disease. I got back to Munch and noticed the muted palette of colours in some of his works. I also noticed the attention and tenderness with which Karen Blair builds her images [6]. 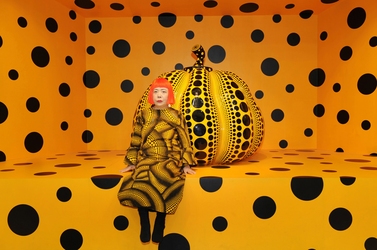 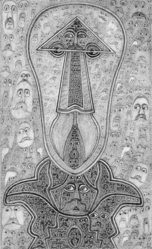 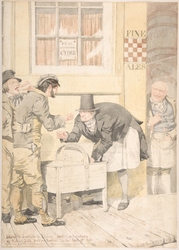 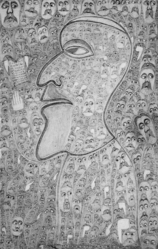 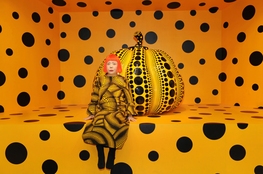 Fig. 6. Edmund Monsiel
Fig. 6. Edmund Monsiel
Creative activity stabilizes the condition of those suffering from neurotic and psychopathological disorders, including schizophrenia. The reason I questioned Agnes Martin‘s diagnosis was that her work is fully presented in its pacifying light. Probably her high professionalism and the fact that she personally destroyed a large part of her artworks4, the existence of which could change the overall character of her creative path, contribute to this. Agnes gave advice on improving functionality; she urged us to realize our biggest enemy – self-destruction. She had given lectures filled with deep spiritual insight and guidance for young artists, but also useful for all of us. If she was mentally ill, this should change our conception of the disease – Agnes Martin’s biography contributes highly to the idea that we should no longer perceive schizophrenia as a reason for lynching, but as a trauma to the soul. I am ending the essay with two quotes from her lectures at the Institute of Contemporary Art at the University of Pennsylvania.

You may publish no more than 25% of the article with a link to the initial posting on art-in-psychology.com and the author's name. 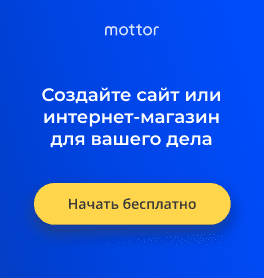 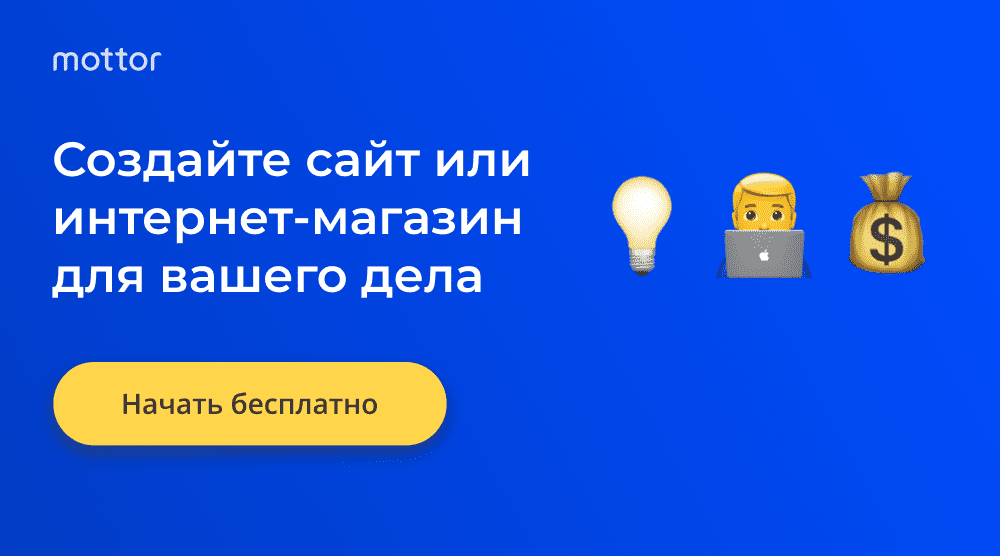